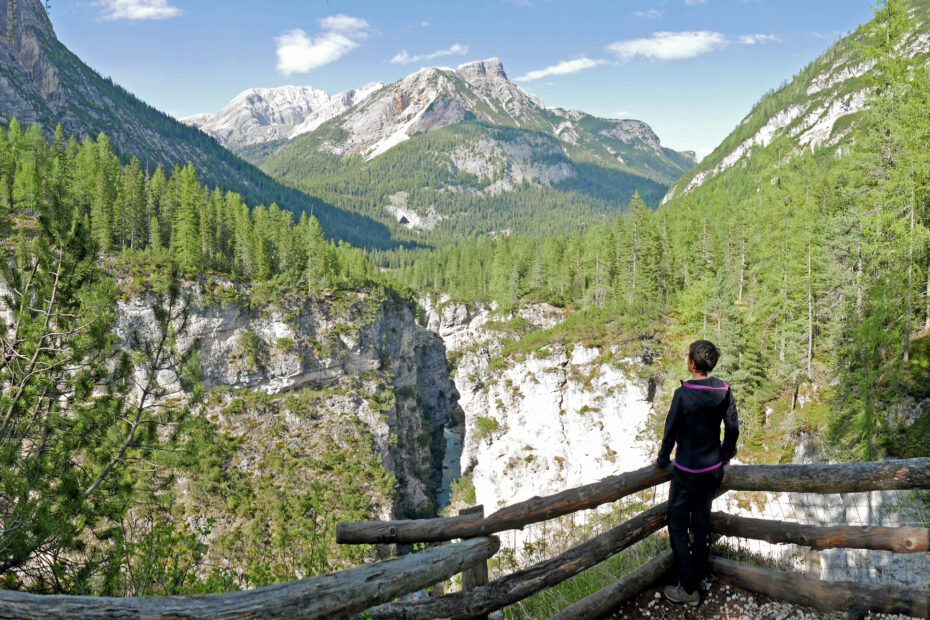 Brief description: hike along the most beautiful waterfall and canyon system in the Dolomites.

Among the many unique and truly beautiful sites that make Cortina d’Ampezzo famous is the canyon carved in the mountains by rio Fanes and the majestic waterfalls along its course.

We depart Pian de Loa following a paved road that crosses the river Boite and shortly thereafter Rio Fanes. Continuing on a gradual ascent along a dirt road, we reach Ponte Outo (“High Bridge”), a short bridge over the narrow but very deep gorge of Rio Travenanzes.

Shortly past Ponte Outo is the lowest of the Fanes waterfalls, but access to this site is restricted to hikers fully equipped with climbing gear. Instead, we follow a steep trail in the woods, eventually reaching the river and its tumultuous waters, and we continue upstream along secured metal pathways and stairs, enjoying the view of impressive waterfalls, rapids and pristine water puddles.

Still ascending, we reach “Sbarco de Fanes”, a spectacular waterfall at the base of the vertical wall of mount Taé. This is the highest point of our hike.

Heading home along a path that crosses the woods of Progoito, we catch glimpses of the solitary Val Travenanzes and the imposing north face of Tofane.